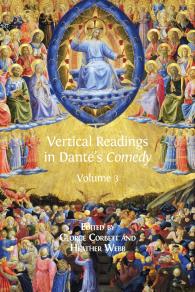 Vertical Readings in Dante’s Comedy is a reappraisal of the poem by an international team of thirty-four scholars. Each vertical reading analyses three same-numbered cantos from the three canticles: Inferno i, Purgatorio i and Paradiso i; Inferno ii, Purgatorio ii and Paradiso ii; etc. Although scholars have suggested before that there are correspondences between same-numbered cantos that beg to be explored, this is the first time that the approach has been pursued in a systematic fashion across the poem.

This collection in three volumes offers an unprecedented repertoire of vertical readings for the whole poem. As the first volume exemplifies, vertical reading not only articulates unexamined connections between the three canticles but also unlocks engaging new ways to enter into core concerns of the poem. The three volumes thereby provide an indispensable resource for scholars, students and enthusiasts of Dante. Volume 1 and Volume 2 are also available to read for free.

The volume has its origin in a series of thirty-three public lectures held in Trinity College, the University of Cambridge (2012-2016) which can be accessed at the Cambridge Vertical Readings in Dante’s Comedy website.

Log in to borrow this title and view current loan status.
Read more here How to borrow